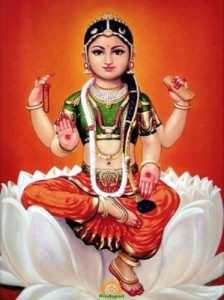 This could be given first in those times because in those times people were more evolved and did not have as much Pitra and Kula dosha or distortions as we have now. There was ignorance but what kind of ignorance? That ignorance which is present in all humans and others. The mistake of not understanding and recognising the Brahman which we can call as ignorance.

When you receive the knowledge about how Maya entangles us. For this the channel towards Brahman needs to open. Sri Bala opens that channel for the sadhak. Other devatas/dieties can only take you within the periphery of their limits, they cannot cross their periphery and move to the teritorry of other dieties. But this is not the case with Bala Tripurasundari, she being one with the Mula Parashakti she doesn’t have any limitations and is not bound by an peripheries.

Channel towards Brahman means understanding how the subtle world operates in the physical world. Recognising who we truly are. Till the time you do not love and respect yourself you cannot give respect to the Param Shakti / Foremost Divine Energy.

You don’t have any idea of how much total energy you have been given. Humans need to become aware of the unlimited energy and invisible properties they have been given, untill they know that they cannot move forward on the spiritual path. That is why Sri Bala is called the Goddess of Power and Energy as she makes you aware of your infinite unlimited energy.

In present time the humans have become entangled in wrong emotions, intentions, desires and karmas. He has received the curses and distortions of his previous generations also as a legacy. All this has made the roots of your existence weak. We have to remove all these distortions and weakness and to enable that Sri Bala Tripurasundari sadhna is given in Sri Vidya